15 Sep An Introduction to Wisconsin-style Brats: What Is Bratwurst

Posted at 14:28h in Grilling Tips by Staff Writer 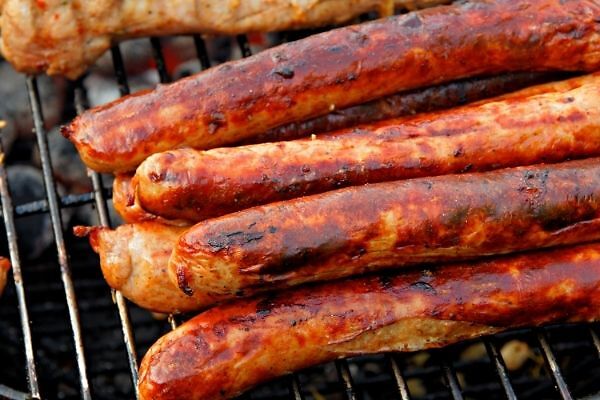 Why Is Bratwurst Famous?

Ah, the brat: one of the finest packets of meat one could ask for. The slight pop when you bite into the casing, the spill of delectable juices, the crunch of the crusty bun: a version of heaven on Earth, if you ask us—and one at your (mustard-smeared) fingertips as the owner of a Bull Grill from Summer Breeze!

Now, brats are mighty popular in more than a few corners of the U.S., including Illinois, Michigan, and Ohio (where, in fact, the city of Bucyrus proclaims itself the “Bratwurst Capital of America” and throws an annual Bucyrus Bratwurst Festival).

But no state is so tightly associated with the bratwurst than Wisconsin, which at this point can honestly compete with Deutschland—the sausage’s ancestral home—as the world’s true brat holyland.

Brats are not only widely enjoyed in the Badger State year-round, their manner of preparation and presentation is also a subject of vigorous debate. We’re going to sketch out a nutshell history of the bratwurst, then dive into the nuts-and-bolts of cooking this noble sausage in true Cheesehead fashion—which, as it happens, can mean one of a few different culinary routes to go down, each with its own rather fierce partisans.

Bratwurst is a sausage usually made from ground veal, pork, or a combination thereof. The name is generally thought to derive from Old High German: brät, meaning well-chopped (or, by some translations, “unwasted”) meat, and wurst, meaning sausage. The ground meat is lightly seasoned with salt and such herbs and spices as nutmeg, pepper, marjoram, sage, or mace, and packed into a casing traditionally made from animal intestines, but which these days is often synthetic.

While you’ll see reference to boiled, broiled, baked, and smoked brats, the purist’s method of cooking bratwurst is on the grill. (We’ll get to what a brat “fry” refers to as we delve into the rich, delicious world of Wisconsin bratwurst tradition.)

A Brief History of Bratwurst

Brats hail from central and southern Germany, with some uncertainty over the exact source-region (generally considered either Franconia, which encompasses much of modern Bavaria, or Thüringen) and the timetable of emergence. Brat recipes as old as the 14th century have been identified. Many cities and sub-regions within this broader zone specialized in their own distinctive kind of bratwurst and/or manner of cooking, reflecting centuries of refinement.

Among the best-known of these regional styles is the Nuremberg bratwurst: a little, finger-sized sausage grilled over a wood fire and meant to be eaten (off a pewter place) in hefty quantities. (As R.W. Apple Jr. notes in this 2002 New York Times history, another time-tested German species of brat, the Coburgian, was historically cooked over flames fed by pinecones.)

German immigrants who landed on American shores in the millions between the mid-19th and early 20th centuries brought with them a love of bratwurst, which—like so many foods—evolved a bit in this new land. German-American sausage-makers came to generally favor pork over veal to produce brats, which also grew in size compared to most of their Old World counterparts. 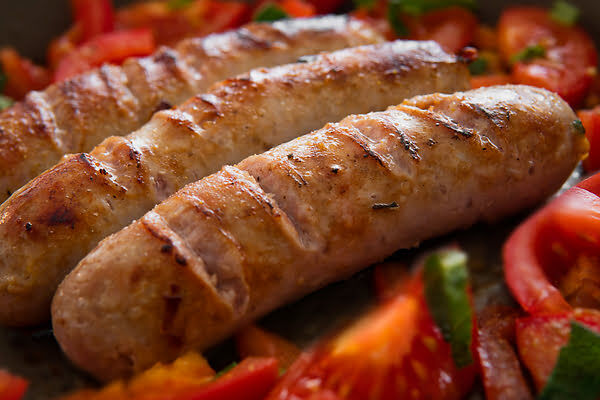 The primary U.S. epicenter of early bratdom was—you guessed it—Wisconsin, more than 40 percent of whose residents today lay claim to German ancestry. The mid-sized city of Sheboygan, about an hour north of Milwaukee up the Lake Michigan coast, is widely regarded as the ultimate portal through which German brat-making and brat-enjoyment spread.

Brats as a Wisconsin Institution 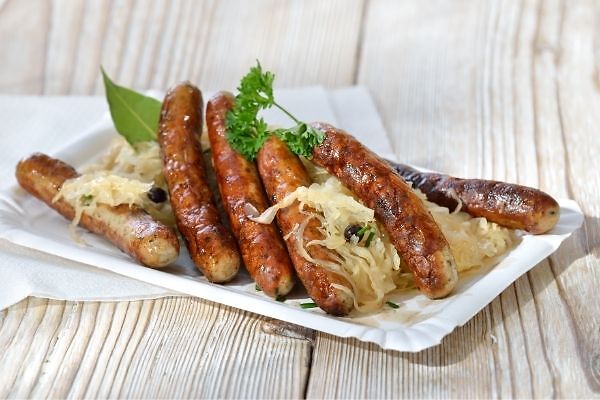 Venerated and consumed with gusto as they may be in other corners of the Midwest as well as the Northeast, brats are, when all is said and done, most deeply rooted into cultural consciousness and culinary heritage in Wisconsin, at least when it comes to the U.S. And given their preeminence in the Badger State compared with Germany’s awesome plethora of different sausage varieties, we think the brat may well find its true modern spiritual home in America’s Dairyland. (Which is not to say you can’t enjoy fantastic knockwurst, bockwurst, kielbasa, and other sausages in Wisconsin—Wisconsinites are basically come-one, come-all when it comes to these meat cylinders. But the brat, no question, is king.)

Brats have been served at the Milwaukee Brewers’ baseball stadium since 1954. They’re classic tailgating fare from Lambeau Field to Camp Randall Stadium (home to Badgers college football). And countless brats sizzle away at Milwaukee’s summertime Germanfest soiree, not to mention at the “World’s Largest Brat Fest” held annually in Madison.

While there are technically many ways you can cook a bratwurst, it stands to reason you should probably at least familiarize yourself with—and, realistically, adhere to—how these juicy sausages are handled in Wisconsin. And doing so means getting acquainted with a few of the state’s different branches of brat methodology, the fine points and relative merits of which can certainly inspire some passionate arguments at your average Packers watch party.

How To Cook Bratwurst

At the most simplistic level, you can distinguish between how brats are cooked in Sheboygan—that aforementioned historical center of Wisconsin brat tradition—and how they’re cooked elsewhere in the state. (And in fact you’ll sometimes see brats served in other parts of Wisconsin advertised as “Sheboygan-style brats,” though there’s something extra-special about sampling the sausage in the actual town itself.)

Sheboyganites insist that brats must be grilled over charcoal, though instead of “grill” they typically say “fry”—hence the colloquial phrase a “brat fry.” To be clear, this still refers to grilling brats, not frying them.

The Sheboygan brat is served on a particular kind of hard, circular bun called the semmel roll, which is buttered after being sliced. (This is Wisconsin, after all.) While you can certainly order a “single” brat in your semmel, most dyed-in-the-wool brat enthusiasts are going to go with a “double”: two sausages stuffed within that buttery roll and sticking out the sides.

Sometimes—as at the venerable and completely unassuming Charcoal Inn, one of several hallowed, long-running houses of brats in Sheboygan—the sausage is sliced in two before serving.

The Sheboygan brat is grilled over medium-low heat: don’t stick them on until your coals are ashed over and whitish. Too hot a fire will split the casings on the brats, the end result being a fair amount of juiciness being lost to the flames. For the same reason, many Sheboygan brat zealots insist on handling the sausages with fingers alone—both when placing them on the grill and when turning them.

Generally speaking, it’ll take 20 minutes or so, cooking on each side, to get the brats to browned, juicy goodness. The perfectly cooked brat should be firm when squeezed and in the vicinity of 180 degrees F internal temperature. 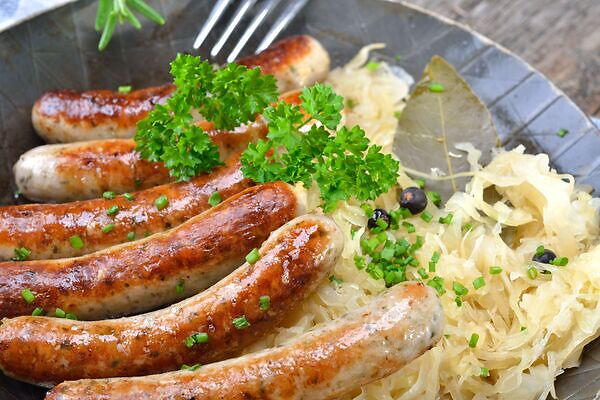 A classic Sheboygan brat will, depending on preference, be garnished with stone-ground mustard, raw onions, dill pickles, and ketchup. The latter condiment is controversial, to say the least, with many brat-lovers elsewhere in Wisconsin swearing it should be restricted to hamburgers and hot dogs, not slathered on a bratwurst.

The rest-of-Wisconsin approach to cooking and serving brats is a bit looser and freer. Charcoal isn’t required, for example—though it’s still the preferred fuel of choice for many—and condiments may include the widely popular sauerkraut, which Sheboygan brat specialists turn up their nose against.

Should I Soak My Brats In Beer?

Many an all-purpose Wisconsin bratmaster insists upon the beer bath, a step in the cooking process that manages to incorporate another of the Badger State’s deep cultural loves.

There are, however, a few schools of thought as to the function of the beer bath in cooking a brat and just when to employ it.

Lots of folks go with the beer simmer pre-grill. Here’s the general approach: slice up some onion and place the rough pieces with the brats into a pan filled with enough beer to cover the sausages.

What Kind of Beer For Bratwurst?

Now, you can go with just about any sort of beer you want, but most aficionados insist upon using cheap, light brew: Pabst Blue Ribbon, Old Milwaukee, or (if it’s available in your area) Schlitz would be appropriate, given their Wisconsin roots.

Heavier beers may be too flavorful, for one thing, and besides, you may be leery about pouring a few cans of your favorite pricey craft beer into the pot.

Bring this beer bath to a boil, then drop the heat to barely a simmer. Let the brats soak in this (truly fantastic-smelling) broth for about 20 minutes or so while the coals cool to the proper, gentle heat level, then transfer them to the grill.

The brats will be cooked already, so they only need, say, six to ten minutes on the grill to get nice and browned.

The main idea is that simmering the brats awhile in beer (or, if you’re stingy about your suds, a beer/water mixture) softens the casings and makes them less likely to split over the coals. Furthermore, proponents of this approach insist there’s a flavor benefit to an extended soak in brewski and onions. 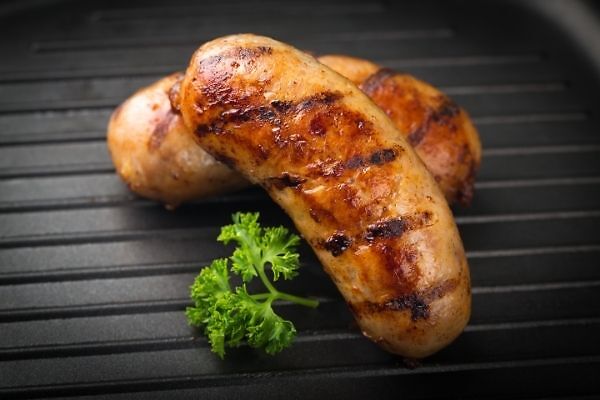 This pre-grill beer bath is most definitely not the Sheboygan way. And some beer-bath advocates—including more than a few Sheboyganites open to incorporating beer into the recipe for a perfect brat—say it should be used after the grill, not before, whether to keep cooked brats warm if they can’t be immediately served, to add a bit of flavor and moistness, or both. These practitioners also sometimes claim that the alleged flavor benefits of the pre-grill beer bath are mostly lost when the sausages are crisping over the coals.

Fortunately, there’s a way around this wrangling: do both! Try the pre-grill beer simmer, then give the cooked brats a quick follow up soak before slapping them on that hard bun and applying whatever condiments your tastes (and philosophical preferences) agree with.

Whether you want to go the straight-and-narrow Sheboygan path and use charcoal, or you’re A-OK with gas-grilled (or, heaven forbid, even pan-seared) brats, turn to Summer Breeze for the finest in outdoor kitchen equipment. Our Bull Grills give you the most powerful and versatile cooking tools for pulling off the perfect “brat fry” in the Lowcountry! The cheesehead and Aaron Rodgers jersey—well, that’s up to you to secure.